Hi there everyone hope you are all well. If you are like me and sending the kiddies back to school today I hope you enjoy a day of peace! We had a fantastic day on Saturday by being lucky enough to win some passes for the kids to attend the MGC Rite of Passage. We spent the whole day at the G with the kids getting a football each, showbags, playing on the field before the game, meeting some footy players and a photo all followed by being able to watch the footy match for which my sister came and met us. Luckily for Lizzie and me it was a Hawthorn game (Mick and Robbie are collingwood supporters) which meant we got to see our boys play and they played so well.  Even though we did not win it was so close that you did not walk away feeling disappointed.
Yesterday afternoon I got to sit down and have a play and decided to play along with Totally Gorjuss being water. We have to show some water on our card. As we are in the middle of winter here I thought this card fitted the challenge well. I originally was following the sketch for Friday Sketches (nearly the same) but I could not make it work. 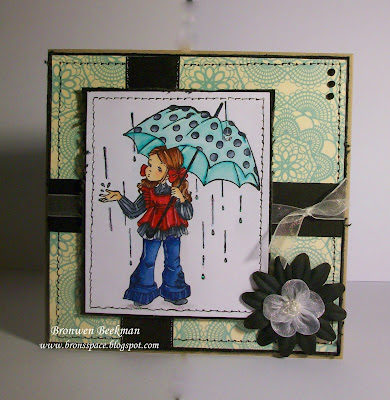 I have used the image from that was sent to me from Paola and after I had finished colouring it realised that my umbrella was not quite the right colour but as I could not just stamp off another and re-do this one will have to do.
Anyhow that is all I have for you today. Thanks for stopping by, until next time xoxo
Ingredients:
Stamp from Whiff of Joy
Paper- Thrift Shop from October Afternoon, Kraft & Black cardstock
Colouring Tool - Copic Markers
Embellishments - Ribbons, flowers, rhinestones
Other elements - hand stitching and distressing
Posted by Bron at 08:58

Thank you for taking the time to stop by my blog. I hope you enjoyed what you saw...Have a fantastic day hugs

Welcome to my blog, I hope you enjoy having a look around and that maybe I can inspire you.
All my creations, including designs and photographs are mine unless otherwise stated. They are here for you to enjoy and to take inspiration from. If you do 'take' anything it should be for personal use only and should state the source if you post it on your blog. At no time should they be used for publication or design contests.